Message from the Director: 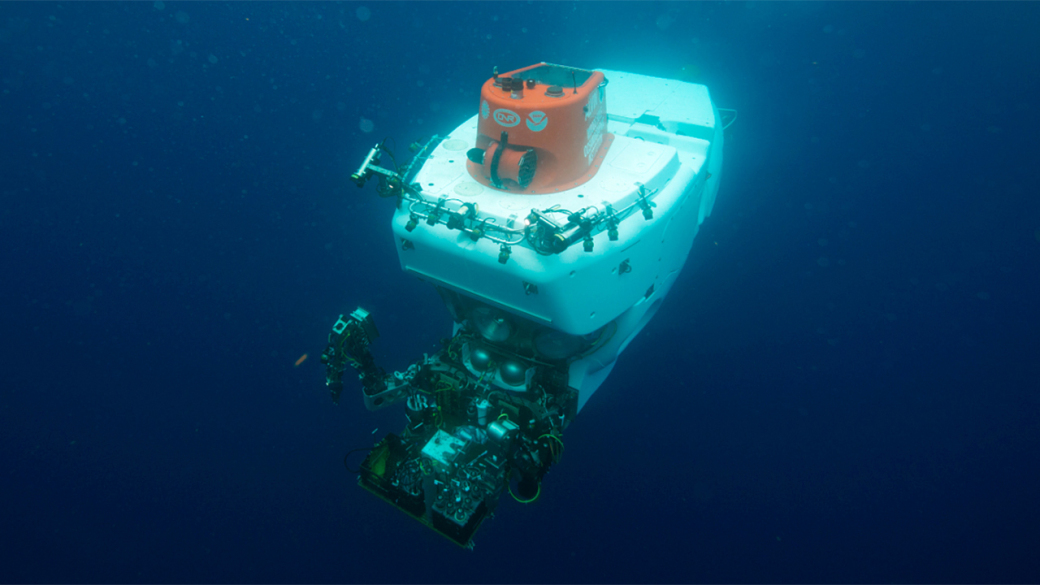 This is Alvin, a submarine operated by the Woods Hole Oceanographic Institution. It’s capable of reaching depths of 4,500 meters and carries two scientists and one pilot on each dive. Photo courtesy of Luis Lamar, WHOI.

C-DEBIer Jason Sylvan (Texas A&M University) is leading a research cruise to study how microbiology, mineralogy, and geology change on hydrothermal vent sulfides right after they stop venting. #Hot2ColdVents, funded by the National Science Foundation, will go to 9˚50”N on the East Pacific Rise during March 25-April 24, 2019 and use Alvin to sample active hydrothermal sulfides and then leave them exposed on the seafloor for one week and one year to follow the changes post-venting. Learn more at the project website and follow the cruise blog.

Fermentation plays a fundamental role in organic carbon degradation on a global scale. However, little is known about how environmental variables influence this process. In a step towards quantifying how temperature and composition influence fermentation, we have calculated the Gibbs energies of 47 fermentation reaction, ΔGr, from 0–150 °C for a broad range of compositions representing microbial habitats as variable as sediments, estuaries, soils, and crustal rocks. The organic compounds in these reactions include amino acids, nucleic acid bases, monosaccharides, carboxylates, methanogenic compounds and more. The amount of energy available varies considerably, from +54 kJ (mol C)−1 for palmitate fermentation, to −184 kJ (mol C)−1 for methylamine disproportionation. For some reactions, there is little difference in ΔGr between low and high energy systems (e.g., the monosaccharide reactions) while others span a much broader range (e.g., the nucleic acid bases). There is no clear-cut trend between exergonicity and temperature, and the values of standard state Gibbs energies of reactions, ΔG0r, for nearly half of the reactions lie outside the range of ΔGr values. To carry out some of these calculations, the thermodynamic properties for six organic compounds were estimated: dimethylamine, trimethylamine, resorcinol, phloroglucinol and cyclohexane carboxylate and its conjugate acid.

Marine dissolved organic carbon (DOC) is highly depleted in radiocarbon and thus inferred to be largely refractory to removal processes that operate on less than millennial timescales. However, a growing number of reports have shown that a large fraction of marine DOC can be effectively removed during circulation through submarine hydrothermal systems. What is not clear, however, is whether the DOC that remains in hydrothermal fluids is remnant non-reactive DOC from recharged seawater, or DOC that has been largely produced in the subsurface. We collected and characterized warm (∼65 °C) hydrothermal fluids from deep (18, 40, 73, 200 m) within the basalt-hosted basement of the Juan de Fuca Ridge flank in the Northeast Pacific Ocean. DOC concentrations in hydrothermal fluids were 9 to 18 μM, much lower than measured in local deep seawater (37.5 μM). DOCΔ14C values of −683‰ to −856‰ were much lower than the Δ14C-dissolved inorganic carbon (DIC) values of −880‰ to −918‰, while DOC δ13C values of −23.6‰ to −27.0‰ were much heavier than that of the particulate organic carbon (POC) pool (∼−34‰), suggesting that biological production in the subsurface is not a primary source of DOC. Rather, our data suggest that isotopically enriched DOC are selectively removed from recharged seawater, leaving DOC that is very isotopically depleted in the basaltic basement fluids. Despite the removal of 50–75% of DOC in the subsurface, nuclear magnetic resonance (NMR) functional group analyses indicate that aromatic compounds were added to basaltic basement fluids during passage through the deep subseafloor and may partly contribute to the depleted 14C DOC in the ridge-flank basement fluids.

The size and biogeochemical impact of the subseafloor biosphere in oceanic crust remain largely unknown due to sampling limitations. We used reactive transport modeling to estimate the size of the subseafloor methanogen population, volume of crust occupied, fluid residence time, and nature of the subsurface mixing zone for two low-temperature hydrothermal vents at Axial Seamount. Monod CH4 production kinetics based on chemostat H2 availability and batch-culture Arrhenius growth kinetics for the hyperthermophile Methanocaldococcus jannaschii and thermophile Methanothermococcus thermolithotrophicus were used to develop and parameterize a reactive transport model, which was constrained by field measurements of H2, CH4, and metagenome methanogen concentration estimates in 20–40 °C hydrothermal fluids. Model results showed that hyperthermophilic methanogens dominate in systems where a narrow flow path geometry is maintained, while thermophilic methanogens dominate in systems where the flow geometry expands. At Axial Seamount, the residence time of fluid below the surface was 29–33 h. Only 1011 methanogenic cells occupying 1.8–18 m3 of ocean crust per m2 of vent seafloor area were needed to produce the observed CH4 anomalies. We show that variations in local geology at diffuse vents can create fluid flow paths that are stable over space and time, harboring persistent and distinct microbial communities.

Earth’s largest aquifer ecosystem resides in igneous oceanic crust, where chemosynthesis and water-rock reactions provide the carbon and energy that support an active deep biosphere. The Calvin Cycle is the predominant carbon fixation pathway in cool, oxic, crust; however, the energy and carbon metabolisms in the deep thermal basaltic aquifer are poorly understood. Anaerobic carbon fixation pathways such as the Wood-Ljungdahl pathway, which uses hydrogen (H2) and CO2, may be common in thermal aquifers since water-rock reactions can produce H2in hydrothermal environments and bicarbonate is abundant in seawater. To test this, we reconstructed the metabolisms of eleven bacterial and archaeal metagenome-assembled genomes from an olivine biofilm obtained from a Juan de Fuca Ridge basaltic aquifer. We found that the dominant carbon fixation pathway was the Wood-Ljungdahl pathway, which was present in seven of the eight bacterial genomes. Anaerobic respiration appears to be driven by sulfate reduction, and one bacterial genome contained a complete nitrogen fixation pathway. This study reveals the potential pathways for carbon and energy flux in the deep anoxic thermal aquifer ecosystem, and suggests that ancient H2-based chemolithoautotrophy, which once dominated Earth’s early biosphere, may thus remain one of the dominant metabolisms in the suboceanic aquifer today.

AGU: Propose a session, town hall, or workshop for the 2019 Fall Meeting, December 9-13, San Francisco - NEW!
As AGU marks its Centennial in 2019, we return to San Francisco, the home of the Fall Meeting for more than 40 years. Join our diverse community at the newly renovated Moscone Center as we collaborate across borders and boundaries to explore and develop our research. Don’t miss this once-in-a-lifetime opportunity to participate in Centennial presentations and special events that will bring to life the past, present and the future of our science. Today we experience “Science at the Speed of Life.” Fall Meeting will prepare you for what’s ahead: rapid developments in our science, new approaches to observing our Earth and beyond, the introduction of new data streams, growing demand for accessible science, the expansion of convergent science, and more. There is no better place than Fall Meeting to look into the future and develop your skills and your understanding of other disciplines at the same time. At Fall Meeting, we will draw inspiration from each other and will show how earth and space science enables a more resilient and sustainable future for all. Proposal deadline: April 17, 2019.

IODP Workshop: IBM Arc System & Analogs
Workshop participation is open to U.S. and international researchers and the deadline to apply is May 1, 2019.

C-DEBI: Call for Nominations: Professional Development Webinar Series - NEW!
Know someone who can share their knowledge of essential skills not learned in graduate school, like developing a syllabus, how to choose what professional service committees to serve on or how to transition to a career in industry? C-DEBI seeks nominations for its Professional Development Webinar series. In addition to providing training in state-of-the-art technologies and instrumentation for graduate students and beyond, we emphasize professional development training targeting skills needed both in and out of academia. These live interactive webinars provide transferable skills for all early career scientists and will be archived on the website for those unable to “attend” the live events. Potential speakers can be nominated by colleagues, mentors, or those mentored by C-DEBI participants; they can also self-nominate. Selected C-DEBI Professional Development Speakers will make a presentation online, using video conferencing tools, with assistance from the C-DEBI main office at USC. Nominated C-DEBI Professional Development Speakers should be capable of combining compelling visual materials with the ability to communicate effectively to a broad audience. Please send nominee name, contact info/description, and subject topic to Education, Outreach, & Diversity Managing Director, Stephanie Schroeder slschroe@usc.edu.

C-DEBI: Community College Research Internship for Scientific Engagement (CC-RISE)
CC-RISE is an eight-week, paid, summer research internship program for community college students run by the Center for Dark Energy Biosphere Investigations. Students will gain firsthand exposure to the scientific process by working in a faculty-led research lab at the Woods Hole Oceanographic Institution in Woods Hole, MA. In addition to research, students will participate in activities focusing on how to transition from a two-year college to a university and information on graduate school. At the end of the program, students will present their results to an audience of peers and mentors. Applications are due March 29, 2019.

IODP-USSSP: U.S. Travel Support for Petrophysics Summer School
The deadline to apply for travel support and for the course is April 22, 2019.

NSF-UNOLS: Invitation to Participate in AXIAL aboard the R/V Marcus Langseth
Applications due April 1, 2019.

IODP-USSSP: Apply to Sail on Expedition 388: Equatorial Atlantic Gateway
The deadline to apply is April 1, 2019.

You are receiving this e-mail because you opted in at our website or requested to be added via e-mail.